Xavier Center for Teaching Excellence on Names, Belonging, and Success

A Campus Climate Survey at Xavier University highlighted the concept and importance of belonging to student success. A letter from the Xavier Center for Teaching Excellence summarized:

“According to Terrell Strayhorn (2012), the number one key to student success in college pertains to the concept of belonging. A basic human need, students’ sense of belonging has been associated with positive outcomes in college, including academic achievement, satisfaction, and adjustment.” 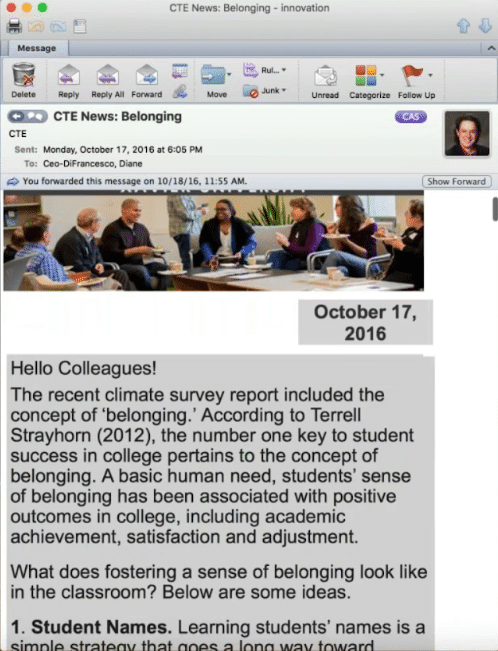 The first recommendation from the Center for Teaching Excellence was the simple strategy of learning student names. As they pointed out:

“Learning students’ names is a simple strategy that goes a long way toward fostering inclusion in the classroom. Griffiths (2010) identified this deeply rooted human need as universal. The author pinpoints the lack of the use of student names by instructors and peers as one of the most alienating aspects of the classroom environment.”

Xavier’s CTE continues that for the challenging names on Canvas class rosters, “NameCoach can aid you in conquering them by listening to your students’ recordings.”

And did they? When students are first admitted, they are prompted to record their names as part of a checklist. These audio recordings then automatically appear in Canvas for the courses in which they are enrolled, using the NameCoach LTI Roster Tool. In the first few weeks of the Fall 2017 term, instructors played audio pronunciations back over 1500 times – each time, taking a moment to ensure that they could convey the message that ‘I respect you, you belong here.’

(For more on how Xavier leverages NameCoach for admitted students through graduation, check out their case study as told by David Mengel, Dean of the College of Arts and Sciences.)

But is there more to it than the impact on student success and the educational mission? Communicating a sense of belonging through proper name pronunciation may also impact recruiting and retention, and therefore the financial health of the institution. Learn how in our post on Belonging, Student Success, and Persistence: the Simple Power of Names.