Belonging, Student Success, and Persistence: the Simple Power of Names

In a previous post, we learned how the Xavier University Center for Teaching Excellence has deployed NameCoach to help address the most important element in student success: sense of belonging.

“According to Terrell Strayhorn (2012), the number one key to student success in college pertains to the concept of belonging. A basic human need, students’ sense of belonging has been associated with positive outcomes in college, including academic achievement, satisfaction, and adjustment.” – Xavier Center for Teaching Excellence

And helping instructors use student names and pronounce them correctly is a key step:

“Learning students’ names is a simple strategy that goes a long way toward fostering inclusion in the classroom. Griffiths (2010) identified this deeply rooted human need as universal. The author pinpoints the lack of the use of student names by instructors and peers as one of the most alienating aspects of the classroom environment.” – Xavier Center for Teaching Excellence

In this post, we examine the ‘why’ and ‘how’ of this alienation, and the importance of names and belonging in both student success and persistence.

In “How worries about belonging can inhibit achievement”, Natalie Orenstein examines recent studies on belonging and academic achievement. The mechanism by which feeling excluded inhibits college success is straightforward:

“When individuals are repeatedly asking themselves whether they belong or not, it can make inevitable setbacks and challenges feel like a sign they can never succeed. This diminishes motivation to engage and persist in school. Students ask fewer questions in class, study less often with others, and avoid office hours. As a result, their grades suffer.”

She cites the work of Gregory Walton and Geoffrey Cohen in “A Question of Belonging: Race, Social Fit, and Achievement.” Walton and Cohen introduce the concept of ‘belonging uncertainty,’ a sense of worry about fitting in that disproportionately affects students from minority and underrepresented backgrounds, including first-generation students. 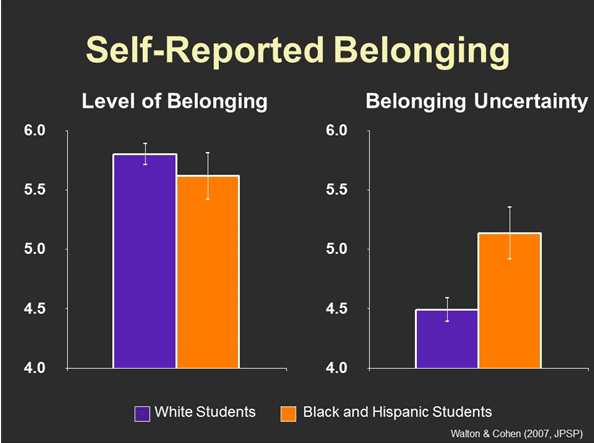 “There is much more to college achievement gaps than differences in preparation or motivation or ability. Instead, it seems as though a major part of racial/ethnic group differences has to do with the previously unnoticed ways in which students make sense of everyday events.”

So how can we improve the way students make sense of everyday events?

Interventions to Improve Sense of Belonging

Walton and Cohen propose a number of interventions to help students overcome belonging uncertainty, largely centering around communicating the ‘meta’ message that the student is not alone in wondering if they belong. This allows students to make better sense of everyday events that they might otherwise take as alienating.

Dr. David Yeager summarized some of these findings in his Keynote Address for the 2017 Terry Piper Lecture Series at CSU-Northridge:

(Learn how CSU-Northridge is deploying NameCoach in this post.)

It’s clear that belonging is important to student success, that this particularly applies to minority and underrepresented students, that everyday reminders that a student doesn’t belong inhibits their success, and that interventions can increase sense of belonging – even seemingly simple ones.

Mispronounced names are a constant, everyday reminder that a student doesn’t belong, and disproportionately plague students from exactly those underrepresented backgrounds that are particularly susceptible to belonging uncertainty. And helping instructors and other students easily learn to pronounce them correctly is a seemingly simple, but effective intervention to increase sense of belonging.

In “The Lasting Impact of Mispronouncing Students’ Names“, Claire McLaughlin cites research which “found that the failure to pronounce a name correctly impacts the world view and social emotional well-being of students, which, of course, is linked to learning.”

That research was done in the K-12 context, and there is no doubt that it applies to Higher Education as well:

“Mispronouncing students’ names and using the wrong pronouns can increase ‘belonging uncertainty,’ which Stanford research shows can affect a student’s performance, stress levels and overall sense of being a valued part of the community.” – Dereca Blackmon, Associate Dean and Director of the Diversity and First Generation Student Office, Stanford University

Failing to get names right makes students question whether or not they belong on campus, which, according to Stanford research, can affect student success.

(To read more about how Stanford is deploying NameCoach, please see this post.)

As we saw in the post on Freezing Summer Melt, getting the name right contributes to the sense of belonging important for bringing students in the door, and is particularly important for minority and first generation students who are most at risk of melt — it’s no surprise that the same is true for student retention.

A recent survey conducted by CSU-Northridge investigated the best predictors for first-year, full-time enrollment for Fall and Spring terms. ‘Belonging’ was at the top of the list.

(Learn how CSU-Northridge is deploying NameCoach in this post.)

This result aligns with a survey referenced in Neal Raisman’s University Business article on the financial impacts of retention and attrition to institutions: 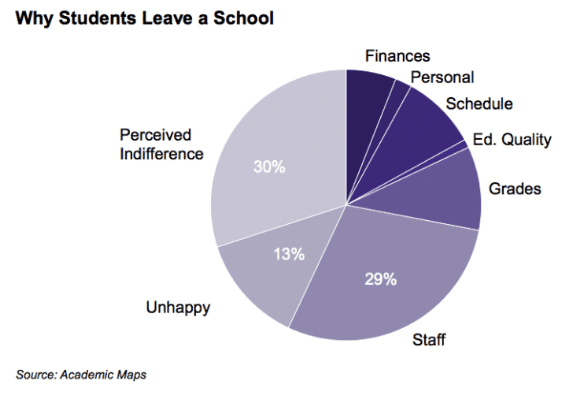 Perceived indifference accounts for 30% of student attrition nationwide – greater than other reason such as personal finances, academics, or general happiness. When students don’t feel like they belong, they are more likely to leave.

And the primacy of belonging in retention is particularly salient for community colleges, in which studies have shown that students often have fewer mechanisms for connection to community than in four-year programs:

“When controlling for background, ability, high school record, and aspirations, students at community colleges are 10 to 18 percent more likely to drop out of college sometime during the first two years than students at four-year colleges with similar backgrounds, abilities, and aspirations. Student characteristics alone have not explained, and do not explain, the high dropout behavior of community college students.” – AACC Re-examining the Community College Mission

This author identifies the additional cause, what turns out to be the major cause of attrition nationally, as something key to community college attrition as well:

“…attrition caused by absence of personal and meaningful contact with members of the college community, resulting in feelings of separation or marginalization.” – Joe Cuseo, The BIG PICTURE: Key Causes of Student Attrition

The perceived indifference that accounts for most attrition, according to Raisman, reflects a failure to make interactions personal.

“This feeling violates our Good Academic Customer Service Principle 1: ‘Everyone wants to attend Cheers University where everyone knows your name and they’re awfully glad you came.’” – Neal Raisman – The Power of Retention

In a related article, Raisman drives the point home:

Knowing names, using names, and getting them right matters. And it matters especially for minority, underrepresented, and first-gen students, who are often the ones most at risk of attrition.

In “A teacher mispronouncing a student’s name can have a lasting impact,” Corey Mitchell points out that mispronounced names are often just the first of many signals to a student that they don’t belong, which continues with a general deficiency in culturally-responsive teaching. This cultural responsiveness and the sense of belonging it engenders is key to maintaining student persistence.

“The dropout rate for foreign-born and immigrant students remains above 30 percent, three times that of U.S.-born white students… a teacher who knows their name and can pronounce it correctly signals respect and marks a critical step in helping them adjust to school… Butchered names are not just a problem for English learners and immigrants; students from a number of cultural backgrounds have their names garbled. ” – Corey Mitchell – A teacher mispronouncing a student’s name can have a lasting impact

A common theme in recent research on student success, persistence, and yield is personalization that instills a sense of belonging and community in students. Research also shows that pronouncing names correctly turns out to be critical to sense of belonging, and that the groups most impacted by belonging uncertainty include those with names that many are often unfamiliar with. That’s why ensuring that everyone in a campus community can easily learn how to pronounce each others’ names can be a seemingly simple, but effective key first step in addressing these important and interconnected issues facing campuses today.